Skip to content
Home > Blog > ‘Why Save Legal Aid?’ Event is a Great Success

‘Why Save Legal Aid?’ Event is a Great Success

We attended the ‘Why Save Legal Aid?’ event last night held at Northumbria Law School. The event was organised by our very own paralegals Ronagh Craddock and Emily Humble in their roles at the Junior Lawyers Division.

Ronagh explained why they decided to organise and host the event:

“Wednesday 1st April marks the two year anniversary of the Legal Aid, Sentencing and Punishment of Offenders Act and during the past two years the impact of the cuts has really come to light. Working in family law I see how inaccessible justice has become for people. Every day I am forced to turn people away. We organised this event, in the run up to the general election in May, to consider lessons learned over the past two years, to remember why Legal Aid was introduced in the first place, and to hear about the ongoing challenges against cuts.

The Legal Aid cuts are not the most uplifting topic so I wasn’t sure how successful the event would be, but we had a great turn out and it really shows that this is something people in the North East are passionate about. It was powerful and moving to hear the devastating stories of people who have been impacted by the cuts. It was also great to end on a positive note by hearing about the strength of ongoing campaigns and judicial reviews against the cuts and to be reminded that we can and should make Legal Aid an issue in the upcoming general election.”

The event started with the screening of the powerful ‘Are You For Justice?’ Justice Alliance video.

Speaking at the event was Ben Hoare Bell Partner and specialist family lawyer Cris McCurley. Cris works tirelessly for vulnerable people – many of whom now find it almost impossible to secure Legal Aid. Cris spends many hours campaigning against the Legal Aid cuts and delivered a powerful speech about the effects of the cuts on victims of domestic abuse.

Jayne Edwards, Director of Newcastle Law Centre, was next to speak. Jayne gave a passionate talk on the work the Law Centre does and the disastrous effects the Legal Aid cuts have had on vulnerable people in the community. Jayne gave several examples of members of the public who now fall outside the scope of Legal Aid and are unable to challenge the justice system.

Finally Marian Cleghorn of Trinity Chambers covered the Government response to various campaigns against the Legal Aid reforms. This was particularly relevant in light of this weeks decision regarding the Criminal Legal Aid Duty Contracts. Marian also spoke of her experience of being face to face with the judiciary and seeing the failures that have occurred as a result of the Legal Aid cuts.

Emily explains why this event and other events like it are so important:

“It was a great event and fantastic to see so many people there. Legal Aid is vital in ensuring access to justice for those who, often, are some of the most vulnerable members of society. At Ben Hoare Bell we experience the effects of the Legal Aid cuts, first-hand, every day. But public awareness of the true situation is lacking. This is something that must change. We want people to make some noise, spread the word and take action.”

Guests at the event were encouraged to sign the Justice Alliance petition and to take ‘jelfies’ with the ‘I am For Justice’ slogan. 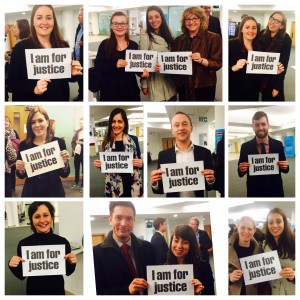