The Traveller Movement Annual National Conference took place on 24 November 2017. This year the conference was about ‘Care and Custody: A Social Justice Agenda’.

It was a full house and packed programme for the day, with enthusiastic participation both with the panel Q&A sessions and in the workshops.

The first of two panels addressed social care, inequalities across health and social care, and the often fractured relationships between travelling communities and statutory bodies and professionals.

The second panel addressed Domestic  Violence, and in arguably the most powerful address of the day, Tina McInerney of the TM and GRT Women’s Empowerment Network spoke of her own experience of leaving a violent marriage with her children, and the fall out in terms of her family and community as a result.

This was continued in a very well attended workshop – Domestic Violence: Never going to beat you, which was an open forum to discuss and expand upon the issues raised by Tina in her address to conference. In a lively debate there were a lot of courageous testimonies given by many survivors of their experiences of shame, stigma, familial support of the perpetrator and the drive to keep marriages together, violence notwithstanding. Setting this in the context of child protection and the tension of Social Services duties to protect children from the impact of DV, there were a great many ideas shared about how GRT communities can begin to address these tough issues from within.

Key to this is going to be these amazing and brave women who put their heads above the parapet and share their experiences, highlighting that change must come, and is coming. They will be the change, and if there was one message to be taken from them it is “Nothing about us, without us”. It was inspiring.

Other workshops addressed LGBT inclusion in the GRT communities, Policing: improving relationships between the GRT Communities and the Police, and Economic inclusion.

Another stand out moment of the day was the Key Note address of David Lammy MP, who addressed the conference about the findings of his most recent review on the treatment of BME communities and individuals in the criminal Justice system. He highlighted the disproportionate representation of BME people in the system, and particularly addressed the conference on the interviews he had conducted with members of the GRT communities. Continuing the theme of Domestic Violence, he stated that all women in the prison system are there because of a man, and because of abuse. He assured conference, “I’m not going away” in response to what he will do if the Government don’t act on his findings.

Also launched and discussed in the second panel was the Bulletin informing GRT parents what they need to know if Social Workers get involved with their families and children. This is an essential piece of kit for all parents in the GRT world living in the UK, and film versions of it will soon be appearing on the Traveller Movement Webpage. 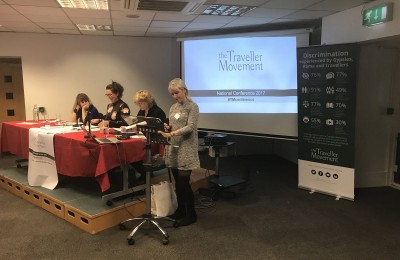 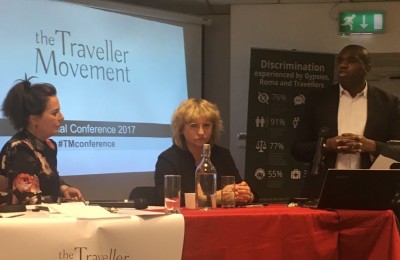