As with every Convention all signatory Governments have to report on a 4 yearly basis to the UN Commissioners. This should include details of how well they are complying with the Convention obligations.  The last UK report was in 2013.

That is only half the story however and there is a standing United Nations CEDAW working group, of which I am a member, which writes the shadow report.  The shadow reports job is to look at the CEDAW obligations and then compare those with what is genuinely happening in the UK and what is being reported by the Government to the UN Commissioners. The shadow report therefore evidences the real situation on the ground to “tell it like it is”.

In July 2013 I was part of a large delegation that went to Geneva to speak to the shadow report that we had written.  I prepared the chapters on access to justice and legal aid which accord with Article 16 of the CEDAW obligations. 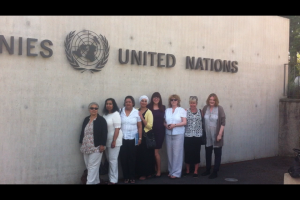 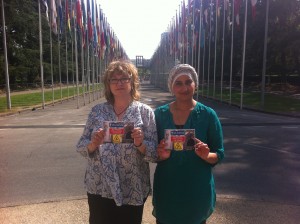 After hearing the Governments evidence and hearing evidence from members of the shadow report writing group the Commissioners wrote their determination, or Judgment, in which they were critical of the Government specifically in relation to legal aid and access to justice. They highlighted the plight of victims of violence against women and stressed the need for them to be given protection from violence, access to justice and where they are financially eligible, legal aid. The Government was ordered to take corrective action to ensure that this finding was resolved. So far, other than a few minor amendments (which according to research carried out by Rights of Women has had little effect) we are still waiting for the Government to respond to these action requirements from the UN.

My most recent enquiries with the Ministry of Justice have revealed that they expect to publish their report by the end of November this year.  The working party is already working on the shadow report and have sent out a call for evidence: specifically about victims of violence against women who are unable to get legal aid because they cannot prove their “victim status.” If you can provide evidence then please follow the link to the evidence call on our website.

General Recommendation’s are statements issued by the United Nations Convention Committees to specify the meaning of the Human Rights obligations and to spell out to member states what they should be doing to comply with the Convention requirements.

General Recommendation 33 is of specific interest to us in the UK working with victims of domestic violence as it identifies 6 interrelated components necessary to ensure that women receive access to justice:

General Recommendation 33 specifically states that member countries should “guarantee that justice systems are economically accessible to women through provision of free or low cost legal aid, advice and representation in judicial and quasi judicial processes.”

It goes on to say that all 6 of the interrelated components are essential as “it is imperative that all are exercised by member states in good will and with due diligence.”  This is a very clear statement about the requirements of our Government and is very timely as it will no doubt feature heavily in our shadow report. It is a really positive and unequivocal reminder to the Government of its international Human Rights law and Convention obligations, specifically when LASPO commences with the comment that “nothing in this Act contravenes international law or Convention obligations.”  We all need to make sure that we now hold the Government to account on this.

Blog by Cris McCurley, Partner and Head of the International Family department